Thanksgiving has become a intricate part of life in the United States. It’s a time to look around oneself and appreciate all that one has achieved and been blessed with.

During one of the earliest Thanksgiving celebrations in 1619, Captain John Woodlief held a service in thanks that his emigrated settlers had reached North America safely. It was a time to consider the opportunities that lay ahead of them in the New World.
Nearly 400 years later, the United States has become one of the most prominent countries in the world. Americans across the country will be celebrating how far they have come in only 400 hundred years.
For us, this is also a time to consider the incredible impact Wild Geese have had on the US over the centuries. Millions of Irish people have arrived on the shores of the US. No other country has received more of The Wild Geese than America and no ethnic group had a greater impact on the history of the USA.
Eight of the fifty-six delegate signatories of the United States Declaration of Independence were of Irish descent. They fought for a beautiful dream – Freedom for Everyone.
Known for their hard-working ethic and community spirit, Wild Geese of all generations have helped to build the great nation which we know today.
To mark the Holiday Season, we’re put together a recipe for a refreshing party paunch. 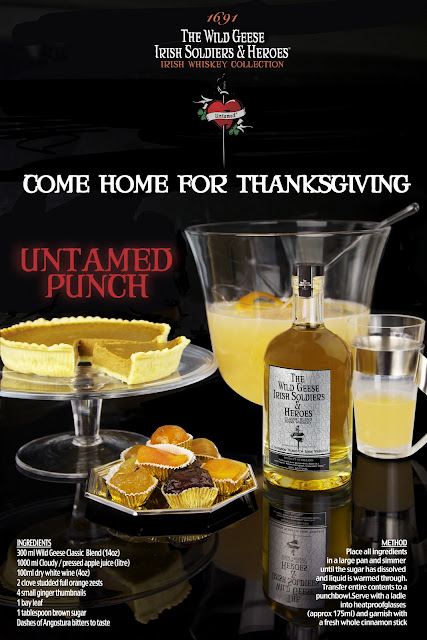 Light, refreshing and festive, it is sure to impress your guests this Thanksgiving.
We hope you all enjoy your Thanksgiving and take some time to appreciate everything you have achieved.
[pinit]